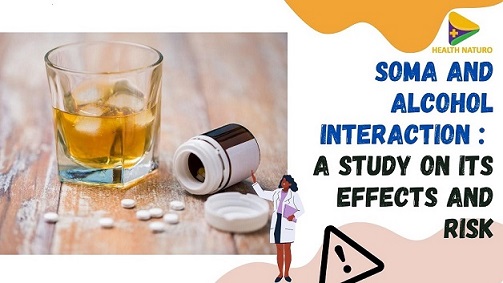 Dangers of Mixing Soma and Alcohol

Have you wondered about the results of recreational mixing of Soma and Alcohol? The use of Soma muscle relaxer is a prescription drug approved by the FDA for treating acute pain in people. However, its euphoric effects are a significant cause of abuse and leisure intake. The effect of Soma and alcohol interaction can be profound in the human body. It can lead to the development of severe medical conditions. One of the most common causes of these interactions is the lack of information on the non-prescription use of the muscle relaxer. So, let us have a better insight into the effects and risks of mixing Carisoprodol with alcohol.

An Overview Of Recreational Use Of Soma And Alcohol

The Soma pill is a class IV schedule drug that indicates its low potency in causing addiction and dependency. Using Alcohol with Soma pain medication is not a wise decision as both compounds have an overlapping effect on the brain receptors [1]. In addition, the extensive use of Soma pills with alcohol can intensify the CNS depressing effect of these compounds.

Musflex, a muscle relaxer formulated with Carisoprodol and Naproxen, is also a very common analgesic to abuse with alcohol. It shows similar efficacy as the Soma pill; therefore, the adverse effects from such interactions are also similar.

Before we get into the details and health risks of taking Carisoprodol with alcohol, we must understand how alcohol and medication interact in general. The alcohol-medicine interaction can be categorized into two main classes [2]-

These interactions, on the contrary, refer to the addictive effect of alcohol with medicines such as the Soma pill. They occur in the individual's central nervous system (CNS) and result in alcohol altering the effect of the medication without changing the concentration of the medication in the blood. The Soma and alcohol interactions may also be synergetic, meaning the combined substances' effect exceeds the sum of their individual effects.

The consumption of alcohol with antidepressants and antihistamines can enhance the sedative effect of the medicine [2].

Abuse Rates of Alcohol and Soma

A study conducted from 1986 to 1997 reports 24 death from overdosing from a combination of Benzodiazepines, Soma, and alcohol. It is also why DEA categorized Carisoprodol as a Schedule IV prescription drug.

Carisoprodol is among the top 25 drugs identified in the USA for abuse in forensic labs. The Drug abuse warning Network also classifies Soma pill as one of the most abused prescription drugs.

Current studies indicate that many teens abuse the Soma pill for recreational purposes. The “Drug abuse” website identifies teen Carisoprodol abuse as one of the potentially accelerating concerns [3].

Why do people take Soma with alcohol?

Combining Soma and alcohol is a common abuse form. Both these compounds work by interacting with the GABA receptor of the brain. They help in slowing down the reaction of the brain to stimuli. It is also likely to cause relaxation in the body's skeletal muscles. The administration of a muscle relaxer with alcohol can lead to the following effect on the user-

Who Mixes Soma and Alcohol Together?

The National Survey on Drug Use and Health reports about 2.3 million people between the age of 12 and older abuses Soma in the USA.

With the advent of online pharmacies, the reports of Carisoprodol abuse have also elevated. People can now buy Soma online in the USA without a valid medical prescription making it easily accessible to addicts.

The possibility of accidental mixing of Soma and alcohol is not uncommon. Many people taking Soma pill for body pain can be unaware of the consequences of drinking alcohol after the administration and may suffer from such accidental interaction.

The effects of the Soma pill wear off within 6 to 7 hours. So individuals administering the muscle relaxer in the daytime can take alcohol in the evening or night.

Mixing soma and alcohol for recreational use

The FDA approves using the Soma pill for short-term acute pain. The use of the muscle relaxer for other purposes or pleasure rather than its medical benefits is termed its recreational use.

Soma recreational use is often sought for its anxiolytic, relaxing, and sedative effects. Its profound effect on Narcotics also contributes to its use in conjugation with opioid medications.

Among most alcohol, the interaction between Soma and beer is widespread, as it is one of the most preferred choices of alcohol in the USA.

About 39% of the U.S population drinks beer over other alcoholic choices, as represented by the graph above [4].

Wine is the second most preferred choice of alcohol among Americans, as per the reports by the “News Gallup” website. Approximately 31% of the population in America consumes wine [4].

So, Is Carisoprodol interaction with beer and wine similar to all alcoholic drinks?

The answer is “YES.”

Both Beer and Wine are classified as alcoholic beverages, and they interact and produce similar effects as all other drinks.

In the absence of alcohol, the activity of CYP is relatively low. Thus, CYP from the liver metabolizes the Soma pill to form meprobamate and further excretes it from the system [2].

Metabolism with Soma and alcohol Interaction

On the intake of alcohol with the Soma pill, the CYP enzyme metabolizes alcohol in addition to the muscle relaxer. Due to this competition, the metabolism of the Soma pill is reduced. It also declines the production of metabolite and excretion rate in individuals. Thus, the level of the Soma pill in the body remains at a higher level, thus causing sedation and euphoric effects [2].

Alcohol and Carisoprodol Abuse in Teens

Most teens misuse prescription medications such as the Soma pill because they consider them safer than most street drugs. They do not realize these interactions and abuse can have severe consequences for the user.

The Epidemiology Work Group states that Carisoprodol is often referred to as “Ds” or “Dance” in Texas and North Florida. According to the website “Drug abuse uses statistics,” 61% of drug abuse went up among 8th grades between 2016 and 2022 [3].

Soma dosage for recreational use

There is no standard Soma dose for recreational use. The prescription dose of the Soma pill is 350mg and 500mg twice or thrice a day. The administration of anything more than the recommended dose can cause abuse.

The intake of Carisoprodol is therefore not advised over three continuous weeks and should not be taken two to three times a day. Any changes in the strength of the muscle relaxer must be done under the supervision of a doctor.

Getting high on soma

The term “Soma high” is often used to describe the euphoric effect of the muscle when taken in combination with alcohol or other substances. It may include a heightened sensation of self-confidence and well-being along with an increase in their energy.

A study evaluating the effects of Soma and Alcohol interaction in users was conducted in 1999. The pharmacokinetic interaction may vary depending on the medication, as the cytochrome P450 enzyme is specific to the medication consumed.

The study indicates that the interaction between Soma and alcohol produces narcotic-like reactions, including extreme weakness, agitation, dizziness, confusion, and euphoria.

Signs and Symptoms of Soma and alcohol abuse

Dependence on mixing muscle relaxers with alcohol can profoundly impact psychological and physiological health. Such people also experience a negative impact on their social life. Note that prolonged use of these compounds can give rise to -

The effects of Carisoprodol and alcohol interactions depend on the dose of the muscle relaxer taken. These drug interactions may occur accidentally due to a lack of product information for recreational purposes.

Taking Soma and alcohol together may impair the user's judgment and thinking ability. It is dangerous for people to drive or operate heavy machines as the combination of these compounds can cause a loss of coordination, thus increasing the chances of accidents. As they act as CNS depressants, they can slow down the nervous system, affecting the user's breathing and heart rate [3].

The intake of muscle relaxers with alcohol for an extended period can cause damage to the kidney and liver. Such interactions cause the liver to process multiple compounds at the same time. Thus inducing damage to the organ. Further, the kidney cannot filter the toxins well when the liver fails to perform the task. The persistent use of Soma with other substances, including alcohol, can also lead to the following health issues [8]-

Abrupt discontinuation in people taking alcohol with the muscle relaxer can cause withdrawal signs. Such users also develop tolerance to alcohol. This threat is also potentially higher in people who-

The Soma withdrawal begins within 12 to 24 hours after the last dose. Some of the signs of Carisoprodol withdrawal are-

Several programs are curetted to assist users with abuse and addiction. These treatments focus on recovery and living a clean life. These processes may include using other medicines with psychotherapies to prevent relapse. There are several American addiction centers and rehab where one can also try detox programs to recover.

Help for Alcohol and Carisoprodol Addiction

Our final verdict on the safety of Soma and alcohol interactions

Our take on the Soma and alcohol interaction would be to refrain from taking them together. The use of the muscle relaxer with alcohol results in enhancing its euphoric properties. Both these compounds act as depressants of the central nervous system, thus intensifying the sedative effects.

Evidence shows possible signs of adverse effects on the physical and physiological health of the person. Such people are also likely to suffer from addiction. So, avoid the intake of alcohol for 6 to 7 hours from the last dose of the Soma pill.

No, it is not advisable to drink wine with muscle relaxers. The interaction of wine and muscle relaxers can cause sedation and a euphoric effect in the user.

The intake of Carisoprodol more than the recommended dose can cause “Soma high.”

Overdosing on the Soma pill is not advised as it can cause serious health risks to the user. Some signs of Soma overdose are hallucinations, muscle stiffness, shallow breathing, agitation, palpitation, fainting, and Blurry vision.

The effects of a muscle relaxer may last for 6 to 7 hours. Therefore it is advisable not to consume alcoholic beverages for about 7 to 8 hours from the last dose.

Soma is an oral pill; therefore, it is advisable to take it by mouth. The snorting of Soma is not recommended. Snorting the Soma pill can damage the nasal cavity, causing wheezing, acute sinusitis, and epistaxis or nose bleeding.