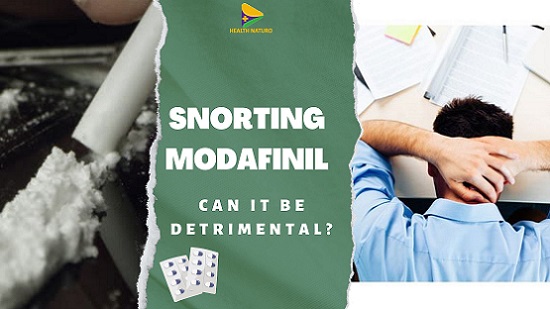 Snorting Modafinil- Can it be detrimental?

When you hear about “snorting Modafinil,” you are either curious or scratching your head, wondering what it really means.

Snorting is a means of using prescription or recreational drugs by crushing or chopping them for nasal administration.

Modafinil snorting is gaining popularity for its faster efficacy delivery and higher abuse potential. But is it ideal for one to snort Modafinil, and what may be its repercussions? This comprehensive blog investigates the benefits and detrimental effects of snorting Nootropics.

Planning to Snort Modafinil- Everything to know

Most illicit drugs, such as cocaine, have always been snorted; however, it is only recently that prescription drugs are also administered through the nasal passage. Modafinil has a low abuse ability and can produce euphoric and psychoactive effects on the central nervous system when taken in larger doses.

People planning to snort Modafinil must be aware of its potential health risks. Even though snorting Modafinil can produce faster results, FDA and physicians advise otherwise.

Reasons why Modafinil snorting is not recommended-

Modafinil is an oral pill, and it is formulated for oral ingestion. The formulation of the Nootropic contains fillers that stabilize the drug in tablet form. In addition, following other routes of administration can potentially elevate the risk of experiencing adverse effects.

Modafinil and its brand versions, such as Modalert and Provigil, are only available as tablets. Therefore to snort Modafinil, it needs to be crushed into a fine powder which may alter its pharmacodynamics, making the Nootropic act faster.

Also, considering the high demand for Modafinil as a Nootropic, the non-availability of its powder form speaks volumes about its safety and efficacy.

Modafinil is a hydrophobic compound (which does not dissolve well in water), making its nasal administration extremely painful [1].

The recommended dose of Modafinil is 200mg as a single tablet once in the morning. Overdosing on the Nootropic can develop signs of anxiety, agitation, confusion, disorientation, restlessness, and digestive changes such as diarrhea, nausea, and vomiting [2].

When Modafinil is crushed, monitoring the dosage can be challenging, especially when it is done solely for abuse. While snorting Modafinil, people often fail to snort the entire dose, creating room for errors. Thus, the best way to administer the dose is to take it orally. For smaller doses, you can split the pill into halves or take a lower dose of the Nootropic.

Why do People Snort Nootropics?

Snorting does not have to be related to just abuse. The medical term for Snorting is insufflation and is often prescribed in conditions such as Asthama, a few flu vaccines, Anesthesia, and Migraine medications [3].

Snorting Nootropics is not recommended by the FDA guidelines and is often associated with abuse and addiction. People often snort Modafinil for sedation and euphoric effects. It also helps people achieve a sense of “high” when taken as monotherapy or conjugation with other compounds.

People often consider snorting prescription drugs safer compared to street drugs. However, it is not the case. Prescription medications such as Modafinil are formulated to be taken in a particular way. Diverting from its original route of administration can have serious health risks [4].

The low cost of Modafinil compared to the most commonly available Nootropics makes it a much-preferred choice. With the advancement of online pharmacies, reports of Modafinil and Modalert online purchases have risen. This ease of accessibility and availability of Nootropics contributes to the higher risk of abuse.

Snorting Modafinil is also likely in people who have developed tolerance to the medication. Snorting thus helps them achieve better and faster results than oral dosing [4].

Snorting Modafinil can be a significant concern among teens. Since they are not formulated for nasal administration, snorting Nootropics can be detrimental. Identifying the signs of Modafinil snorting can help parents monitor their children and prevent Modafinil abuse.

The physical signs of Modafinil snorting include [5]:

One of the main reasons people snort Modafinil is that it allows the Nootropic to enter the bloodstream quicker. Thus, snorting Nootropics works faster compared to oral administration.

The scientific reasons contributing to its faster efficacy and mode of action are:

Modafinil snort enables a more direct route to the bloodstream-

On the other hand, the oral administration of the Modafinil pill takes numerous metabolic pathways before entering the bloodstream. The route of oral intake of Modafinil includes the stomach's acidic environment, the alkaline nature of the duodenum followed by interactions with other compounds taken as food and drinks.

The absorption rate of Modafinil in the bloodstream through oral administration is about 40 to 60%.

Efficacy is independent of metabolization in the liver-

Another reason contributing to the faster effectiveness of snorting Modafinil is that the compound begins to act before getting metabolized in the liver.

The liver is responsible for detoxifying the compounds that enter the body. The metabolism in the liver breaks down the compound, thus reducing the amount of the active compound and slowing down the onset of action

A study was conducted to establish a clear understanding of the efficacy and demerits of modafinil snorting. Deep intranasal delivery of Modafinil on rats showed altered sleep-wake behavior with a dramatic reduction in the Modafinil dose to stimulate wakefulness.

The outcome of the study can be summarized as [6]:

Snorting works much faster than oral administration, but the question here is,

“Do its benefits outweigh its health risks?”

Snorting Modafinil can have numerous health consequences. Since they are taken through the nasal passage, the chief concern associated with the administration is the damage to the respiratory system. Modafinil sorting can damage the mucus membrane, making normal breathing difficult. In severe cases, snorting Modafinil can affect the sense of smell [4].

A damaged mucus membrane can escalate the risk of contracting blood-borne diseases such as HIV and hepatitis C. It is more prevalent in people sharing snorting paraphernalia.

Frequent or long-term Modafinil snorting can damage the septum (the cartilage between the nostrils).

Other health effects of snorting are palpitation, constipation, vomiting, dizziness, and shaking [4].

Reviews and anecdotes of Modafinil snorting

Snorting Modafinil is often discussed by Nootropic enthusiasts and addicts. And what can picture a better image than user reviews on taking Nootropics through the nasal route? So, here is an anthology of anecdotes of Modafinil snorting from Reddit and quora [7,8].

FDA disapproves Modafinil snorting. It is not formulated or developed for intranasal delivery and thus is unavailable in powder form. Crushing and breaking the Modafinil pill can assist in snorting the Nootropic but have a potential risk of overdosing and side effects.

Modafinil is formulated with fillers to stabilize the medicine in tablet form. Inhaling these stabilizers while snorting Modafinil can cause severe nose bleeding, further damaging the mucus glands of the individuals.

We recommend the traditional method of administering Modafinil over intranasal delivery. Yes, it may take a little longer for the medication to work than snorting, but this wait time is completely worth it. Oral ingestion of the pill is much safer, with a low risk of experiencing side effects. Whereas, Modafinil snorting comes with its fair share of health risks which do not justify the one benefit it offers- “faster onset of action.”

Snorting Modafinil directly releases the compound into your bloodstream without going through the liver's metabolism process. It, therefore, causes faster action of the medication compared to oral administration.

Do not snort Modafinil for it to be shorter-lasting. For such cases, taking a lower dose of the Nootropic is advisable, or splitting the Modafinil 200mg pill into two halves.

The onset of action of Modafinil is faster when snorted compared to its oral ingestion. But, the nasal delivery of Modafinil is not approved by FDA and has potential health risks for users.

Modafinil snorting is often done by crushing the pill. Since it is for oral administration, the powder Modafinil is not available. They are formulated with binders and fillers to stabilize the compound in tablet form. These compounds may irritate your nasal lining, causing nose bleeds when taken through snorting.