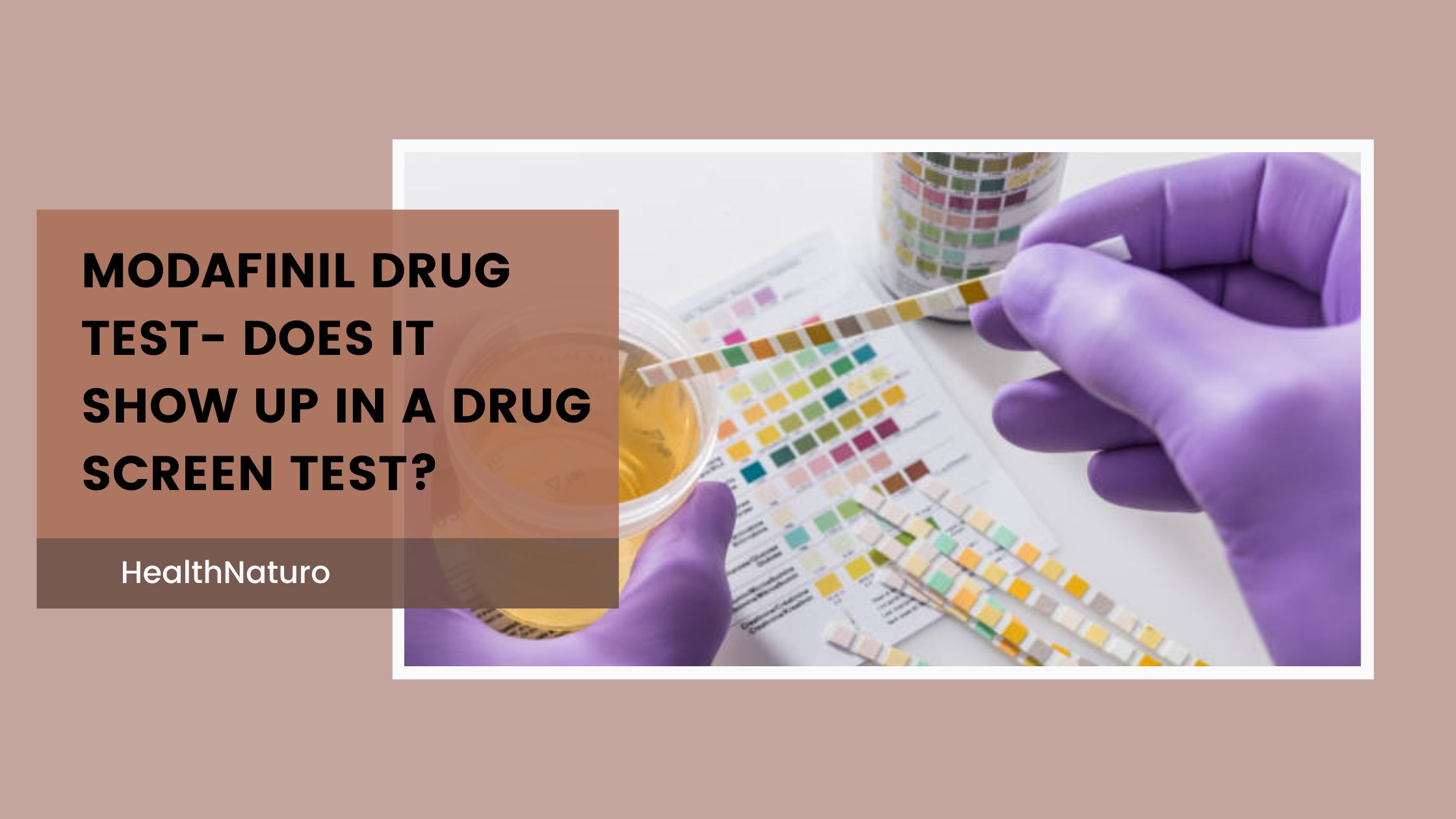 Modafinil Drug Test- Does it show up in a drug screen test?

The significant rise in the Modafinil drug test is due to the increased off-label uses of Modafinil. However, we still struggle to answer the question conclusively:

Does modafinil show on a drug test?

Modafinil drug test is done in several different scenarios and is predominantly done in the corporate world, in athletes, truckers, universities, and people suspected of overdosing or abuse. Being ignorant about it will only land you in trouble.

This Modafinil guide summarizes how the Modafinil drug test works and the safer way to take the Nootropic.

Before we try to answer the question, "Will Modafinil show up on a drug test?" let us first get a better idea of the factor that contributes to the Modafinil drug test results.

If the Modafinil drug test is done after the complete excretion of the product from the body, the test result will show "Negative." So, how do you know if the Modafinil dosage is out of your system? The answer to this question lies in our next question-

How long does Modafinil stay in the system?

Scientific studies to date explain the metabolism of Modafinil as follows [1,2]-

Theoretical evaluation of how long does Modafinil stay in your Urine, Hair, and Blood?

The standard dose of Modafinil is 200mg, and let us consider the administration time as hour “zero.”

With 15 hours of half-life and 65% of Modafinil remaining as an active molecule (130mg), the elimination process will look like [3]-

The above computation indicates that Modafinil stays in the system for much longer, even after its cognitive effect declines. It takes approximately four days for the body to eliminate Modafinil.

Note: The average time for how long Modafinil stays in the system is for a single dose of Modafinil. Users taking the Nootropic every day will take longer to eliminate the compound and its metabolite from the body.

Modafinil is a schedule IV controlled substance and is not available over the counter. The risk of abuse and dependency is low; however, it is not uncommon. According to Wikipedia, the dependency liability of Modafinil is relatively low, whereas the addiction liability is low to very low [7].

The legal status of Modafinil:

Does modafinil show on a drug test ?

80% of Modafinil and its metabolite is excreted through urine [7]. After ingestion of Modafinil, it is available in a testable form for about 30 hours in the urine [8]. It is also detectable in the blood plasma serum.

Modafinil is not often checked in routine drug screenings. So authority has to conduct specific tests to intentionally look for the presence of Modafinil in the urine and blood. If often common in cases of overdose.

Your Modafinil drug test report depends on how long ago you took the last Modafinil dosage before the test. Since, Modafininil 200mg takes about four days to excrete from the body, a drug test done on the 5th day or after that will not be able to detect the presence of Modafinil in the system.

Discontinue your Modafinil intake 80 to 105 hours (3 to 4 days) prior to your drug test to ensure your reports come up negative.

The chemical structure of Modafinil is different from other stimulants, such as amphetamine; therefore, the chances of a “false positive” report are improbable.

What kind of Drug tests are done to detect Modafinil 200 mg?

The discussion of the Modafinil drug test cannot be complete without overlooking how it is being detected in the body. The two primary sources of detection are blood and urine.

The detection of Modafinil through urine test is designed to detect Modafinil and its metabolite even several hours after administering the drug. They are also comparatively cheaper than blood tests.

Detection of Modafinil in Blood-

The modafinil drug test through blood can accurately identify the compound within 2 to 12 hours of administration. The detection of Modafinil through blood is more reliable and accurate. However, it is invasive and far more expensive than a urine test.

A drug screening test can detect Provigil and Modalert if they are specialized to detect Modafinil. Normal drug detection tests (5-panel and 12-panel) cannot screen Modafinil and Provigil.

Modafinil drug test is more prevalent among drug abusers and the four broad categories of organizations listed below.

The cognition-enhancing benefit of Modafinil benefits the military. In the United States, Modafinil 200 mg is approved for use on certain Air force missions. As of 2012, Modafinil is the only stimulant approved for fatigue management. The special operation Forces (SOF) also uses Modafinil during combat battles.

The United Kingdom's Ministry of Defence and the Indian Air Force use it in their contingency plans.

The government and private organizations do not commonly test the presence of Modafinil in the system until they have a reason to do so. Employers test for Modafinil and Provigil in the following circumstances.

It is often very rare for employers to call for a Modafinil drug test for all new employees. Also, Modafinil is unlikely to reduce your productivity, thus making it less of a concern for the organization.

Many international sports organizations consider Modafinil a performance-enhancing drug. Therefore, its usage is banned, and a Modafinil drug test is done before an event. Some sporting organizations that have banned the use of Modafinil 200 mg are-

Modafinil can increase alertness, prevent fatigue, and lower reaction time in athletes, which can be advantageous in a competitive match.

An athlete caught with Modafinil in their system can be suspended for the long term or even be disqualified from the event. They should never buy Modafinil online without a prescription or discontinue its use a week before the drug test is scheduled.

The benefit of Modafinil concerning driving has mixed reviews. The study involving the effects of Modafinil on driving in 16 healthy participants showed that the use of Modafinil dosage reduced lane deviation. It further had a lower effect on off-road tasks and speed deviation. The clinical trial concluded that using Modafinil 200 mg benefits driving performance in drivers with sleep loss [16].

Truck drivers in the USA must undergo a 5-panel drug test before obtaining their commercial license. These 5-panel drug tests are not structured to detect the presence of Modafinil in the system. However, it is best to refrain from taking Modafinil dosage before your scheduled drug test.

The driving advisory by the Federal Motor Carrier Safety Administration (FMCSA) and Department of Transportation (DOT) on driving after administering Modafinil includes [17, 18]-

Will Modafinil show up on a drug test?- User experiences

Now that we know if Modafinil will get detected in a drug test, let us look at user’s experiences with Modafinil drug test [19].

Does modafinil show on a drug test?- let’s tackle this question one last time and sum up everything we have learned so far.

Modafinil drug test will show up POSITIVE if-

Discontinuing the administration of Modafinil 200 mg 5 to 7 days before the test will ensure a negative report.

Yes, Provigil is detected in the urine screening test.

The International Narcotics Control Board does not consider Modafinil 200 mg as a psychotropic or narcotic substance.

Yes, Modafinil military drug tests are performed. One may fail the urinary drug test if one takes Modafinil without a prescription.

The half-life of Modafinil in the human body is 12 to 15 hours. Modafinil may last for 22 to 24 hours in the system, depending on its half-life.

Provigil is the brand name of Modafinil, and it is not permissible for truck and commercial vehicle drivers to administer Modafinil until a physician monitors them for six weeks of usage.