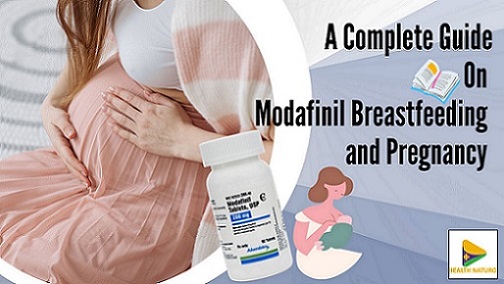 A Complete Guide On Modafinil Breastfeeding And Pregnancy

Administering Modafinil and birth control lowers the effectiveness of the contraceptive, thus elevating the possibility of pregnancy. The Modafinil pregnancy category is C and has a 15% likelihood of causing congenital disabilities. Breastfeeding while Modafinil has risks of developing jitteriness, insomnia, and poor weight gain; however, the relative infant dose (RID) of Modafinil is 5.3% and is considered safe for breastfeeding.

What would happen if you take Modafinil and birth control, or is taking Modafinil during pregnancy or breastfeeding safe? Numerous questions are associated with the administration of the Nootropic during one of the most empowering and crucial phases in a woman's life.

Modafinil is a psychostimulant clinically proven to help with excessive daytime sleepiness. It is prevalent for being one of the most tolerant medicines with lower health risks. However, this asserted safety profile of Modafinil doesn't really apply during pregnancy or for nursing mothers. The use of Modafinil and birth control is also contradicted in numerous conditions.

This comprehensive blog evaluates the risks of taking Modafinil and birth control, along with determining the effect of the Nootropic on the infant or fetus if administered during pregnancy or breastfeeding.

A woman taking birth control is often diagnosed with mood swings or depression. Research indicates it is common in women with mood disorders [1]. A study shows that people using hormonal contraceptives have a higher propensity to use antidepressants [2].

Modafinil or its brand drugs, such as Modalert, are enzyme inducers that increase the liver enzyme's action. These enzymes play a crucial role in breaking down contraceptives, thus giving them lesser time to act than intended [4].

"Modafinil can lower the effectiveness of hormonal contraceptives. Women should continue with their birth control pills after two months of discontinuing Modafinil or Modalert dosage."

There is no scientific evidence indicating the implications of taking birth control with Modafinil; however, there is notable evaluation of the interaction between other enzyme inducers with Modafinil.

The theoretical data supported by the Faculty of Sexual Health and Reproduction Medicine of The Royal College of Obstetrics and Gynaecology indicates that contraceptives are unsafe with Modafinil [4].

Before we discuss the negative impact of taking Modafinil and birth control, let us understand the hypothetical benefits of taking them together. However, do not get us wrong;

We Do Not Recommend Taking Modafinil And Birth Control Together.

We just want you to have a better picture of all the possibilities (both good and bad) of co-administering them together.

We are already aware of the benefits of taking Modafinil in a person's Mood. However, hormonal contraceptives can also improve emotional memory. These are deep memory that is rooted within our psyche [6].

Taking Modafinil and Birth Control reduces the sign of ADHD-

Popular ADHD medicines such as Adderall and Ritalin respond better in women depending on the elevated hormone in the women. A higher estrogen level gives a better response, whereas progesterone exhibits a diminished outcome [7]. So, we can theorize that women with ADHD with higher estrogen levels will showcase better results than men.

The benefits of taking Modafinil and Modafinil were hypothetical and were discussed on clinical grounds. There still has been no eminent evidence to support these speculations. However, the adverse effects of co-administering them together have well-backed scientific data and are worth your attention.

Lower the efficacy of Birth Control-

The conjugative intake of Modafinil and birth control can reduce its effectiveness, thus increasing the chances of getting pregnant.

A study indicates that using Modafinil can significantly lower Ethinyl estradiol (a compound that is formulating birth control) by 18% by enhancing the activity of the CYP3A4/5 enzyme that aids in metabolizing hormonal contraceptives [8].

Women who buy Modalert 200mg tablets must be aware of the consequences of taking the Nootropic with the four prominent birth control options- Patch birth controls, subdermal implants, viginal rings, and pills containing one or several hormones.

So, should you take stop taking contraceptives when under Modafinil treatment?

Thankfully, NO! You can continue taking Modafinil with birth control.
Contraceptives such as DMPA (depot medroxyprogesterone acetate), Copper IUD, and LNG-IUS (Levonorgestrel-releasing intrauterine system) are considered safe when taken with Modafinil [9].

Modafinil can assist you in persevering through complex tasks. However, birth control can lower the level of perseverance while performing a cognitive task [10].

In 1979, FDA established the five risk categories- A, B, C, D, and X to indicate the potency of a drug to cause birth defects during pregnancy. Modafinil is a Category C drug for pregnancy and breastfeeding [1]. The use of the Nootropic during pregnancy can risk the occurrence of congenital malformations [12].

Modafinil Pregnancy- An Evaluation Of Its Adverse Effects

The Medicines and Healthcare products Regulatory Agency (MHRA) warns to review the risks associated with Modafinil and pregnancy before administering it. The perils of taking Modafinil during pregnancy are listed below.

An interim report by Cephalon on Modafinil pregnancy

In 2018, Teva Branded Pharmaceutical Products and Cephalon (the manufacturers of Modafinil) released a temporary report from Pregnancy Registries indicating that 15% of the significant malfunctions in infants are associated with exposure to Modafinil [14].

The fetus is also diagnosed with multiple sclerosis (27%) and sleep disorder (39%), according to a study evaluating the risk of Modafinil pregnancy in 49 women [13]. Based on the same study, the other side effects resulting from Modafinil Pregnancy are hospitalization due to malfunction, diabetes, hypertension, mood disorder, and other mental and behavioral disorders [13].

Anecdotal experiences shared by most pregnant women on being on Modafinil the whole time or until they received a positive report showed no signs of adverse effects [14].

Advice From Healthcare Professionals On Modafinil Use During Pregnancy

Before prescribing Modafinil, the women must be informed about the risk of teratogenicity (the ability to cause birth defects in the fetus).

Health Canada has issued the following guidelines regarding Modafinil pregnancy [15].

After discontinuation of the Modafinil dosage, the use of effective contraceptives must be followed for the next two months. It will give your body the time to return to the regular enzyme activity that Modafinil has affected.

During Pregnancy, one must always take Modafinil, Modalert, and Provigil after consulting a doctor.

No specific human trials indicating the impact of Modafinil on breastmilk are performed to come to an assertive conclusion. However, several clinical studies suggest Modafinil's effect on the mother's milk and breastfeeding infant.

When deciding if a medicine must be taken during breastfeeding, the benefits and risks must outweigh the following-

Also, due to its mechanism of action on the central nervous system and various neurotransmitter receptors, the Nootropic may pass via the blood-brain barrier to the newborn [17].

A study on a 27-year-old woman with idiopathic hypersomnolence taking Modafinil dosage during her pregnancy was analyzed for Armodafinil, the active form of Modafinil. The maximum concentration of Armodafinil was 2.4 μg/mL 2 hours after administration. It gradually decreased over 24 hours [17].

The study indicates that the infant dose was 0.18 mg/kg/day and the relative infant dose was about 5.3%, which is below the theoretical threshold for medical concern (10%). Since Modafinil enters the infant via breast milk, it first reaches the gastrointestinal tract and undergoes first-pass metabolism through the liver. It is essential to look for signs of insomnia, poor weight gain, and jitteriness. If any of these events occur, it is recommended for the mother to either discontinue breastfeeding or administration the Nootropic [17].

Provigil is a Modafibnil brand and showcase similar properties and safety profile. Since Modafinil is considered safe for breastfeeding, therefore Provigil too can be taken.

Adhd medications and brain stimulants such as Modafinil do pass into the breast milk.

No medicine must be administered without consulting your physician if you are pregnant or breastfeeding. However, the medicines to avoid are Advil, Tylenol, antibiotics, antacids, and histamine H2 blockers.

Modafinil is a category C drug for pregnancy and breastfeeding. It should not be administered during pregnancy without a doctor's prescription. It can cause congenital malformations in the infant.

Modafinil pregnancy category is C and is not advisable to be taken without consulting a physician.

Clinical studies indicate that the use of Modafinil is not associated with any fertility problems.

One can beat pregnancy fatigue by-

Yes, stimulants such as Modafinil affect birth control by lowering their efficacy.

Yes, getting pregnant while taking Modafinil is possible. Since the Nootropic lowers the effectiveness of your birth control, the rate of conceiving is high.

Modafinil can lower the efficacy of birth control and, therefore, the possibility of pregnancy.