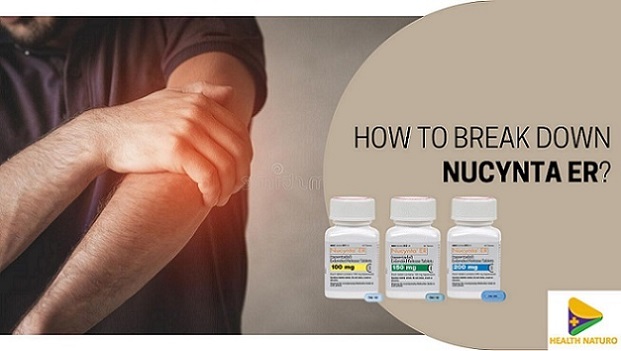 How To Break Down Nucynta ER?

Breaking down Nucynta ER is not advisable and should be taken as a whole; they are also formulated to resist splitting. Improper administration of Nucynta, including breaking, crushing, and snorting, can elevate the risk of overdose or underdose. It can also affect the absorption rate and efficacy of the Tapenatdol dosage.

Nucynta Extended Release (ER) is a centrally acting Tapentadol brand approved for moderate to severe pain in adults. It differs from Nucynta Immediate Release (IR) in efficacy and time of action. One prevalent question most users wonder about is how to break down Nucynta ER. The pill is often split or crushed for both medical and recreational purposes.

So, should you cut Tapentadol into halves, and what are the associated health risks?  This blog meticulously overviews how to break down Nucynta ER along with its uses, benefits, and health risks.

Nucynta Immediate Release was approved by the FDA in 2008, whereas Nucynta ER was approved in 2011. They both have noticeable similarities and differences making it overwhelming for people to choose the correct Tapentadol formulation.

The Nucynta ER 100 mg should be taken twice a day in contrast to Nucynta IR, which can be administered three to four times a day. The maximum dose of Nucynta ER is 500mg per day, and that of IR is 700mg on the first day and 600mg on the subsequent days [1].

The half-life of Tapentadol is 4 hours. It is excreted primarily (95%) through urine within 24 hours of dosing [2].

Tapentadol is an oral medication and must be administered by mouth. Improper ingestion of the analgesic can cause severe health risks in users. A case report of a 32-year-old woman dying of cardiac arrest was elevated to have administered Tapentadol intravenously [3].

How To Break Down Nucynta ER?

The Nucynta ER is formulated to resist crushing or breaking; thus, it is impossible to break down Nucynta ER pills. The Nucynta ER dosage should be taken as a whole without sorting, chewing, or crushing it. Do not break down the Nucynta ER dose into two halves, as it will release too much uncontrolled or unmonitored compound at once instead of over 12 hours. It can therefore cause rapid absorption in the body resulting in adverse effects.

Respiratory depression can often arise from breaking or crushing the Nucynta ER 100mg pills. It may also result in overdosing and death in severe cases.

Tapentadol is a centrally acting analgesic that the medication adopts a dual mode of action, making it a much better and safer choice of opioid pain medication.

The above figure published by the U.S. Securities and Exchange Commission shows that opioid analgesic inhibits nociceptive signs and the body's pain sensation [2]. The onset of action of Nucynta or Palexia (brand name of Tapentadol) is 30 minutes.

Approximately 97% of the generic Tapenatdol is metabolized and excreted as urine via the kidney. The terminal half-life of Nucynta ER is 5 hours.

The U.S. Securities and Exchange Commission figure analyzes Tapentadol's price with other available opioid medicine. The study shows that Nucynta ER and I.R. doses are available at a comparatively affordable price than other analgesics.

Surveys reports indicate a rise in the number of people who buy Tapentadol in the USA for recreational purposes. A study suggests that taking Nucynta ER as a second line of treatment in patients with severe chronic pain instead of oxycodone improves the patient's quality of life at a much more affordable price [5]. The cost of Tapentadol 100 mg at Healthnaturo is $1.25.

The sign of Tapentadol addiction is a strong craving for the medication. Such people often administer Nucynta recreational dosage for sedative and euphoric feelings. They often do not have a prescription for opioid use and get Tapentadol online.

Tapentadol abuse can also result in cases of overdose, resulting in death. Some of the symptoms of Tapentadol overdosing are-

Tapentadol is a highly tolerated drug with a lower chance of experiencing adverse effects. However, conditions such as improper drug administration, overdosing, recreational use, and long-term intake of Tapentadol can cause side effects. The table below represents the possible side effects of Nucynta ER in 980 patients for treating chronic pain compared to placebo (a treatment with no functional properties) [7].

The table, however, does not include all the possible side effects of Tapentadol. Usually, these signs are mild and will gradually disappear. In case the condition persists, you should consult a physician immediately.

Sudden discontinuation of Tapentadol can result in withdrawal signs. These appear within a few hours of stopping the administration of the opioid analgesic. Thus, consult a doctor before completely halting the use of Tapenatdol. The Nucynta Tapering off method is often advised by physicians, including lowering the dosage before discontinuing. It allows the body to adjust to a lower dose of the compound.

The prolonged use of Nucynta ER during pregnancy can cause neonatal opioid withdrawal syndrome in the baby. If this is not recognized and treated at the right time, it can be life-threatening for the infant [5]. Therefore, using Tapentadol during pregnancy is not advisable and should be taken only under the guidance of a physician.

Tapentadol withdrawal symptoms appear within a few hours of the last dosage of the analgesic. Some of the signs of withdrawal are-

This list above is not a complete list of all the withdrawal signs. One may come across other signs apart from the one listed here.

The Tapentadol reviews from the trusted site WebMD speak about its effectiveness, satisfaction, and ease of use. Comparing the two formulations shows that the Nucynta ER has much better user ratings than the generic Tapentadol.

However, reviews indicate that both dosages of Tapentadol are effective for treating fibromyalgia, back pain, arthritis, muscle cramps, and injuries.

You should not break, crush or snort Nucynta ER before administration. It is an oral pill and must be taken as a whole.

Do not break Nucynta ER in half, as it can cause respiratory depression.

The formulation of the Nucynta ER is done to help prevent breaking or crushing. The analgesic should be taken as a whole without being broken.

Tapentadol pills should never be broken or crushed. Such practices allow rapid release of the compound in the blood system, thus causing overdosing, addiction, and abuse.

No, injecting Nucynta dosage intravenously can cause respiratory depression, thus further resulting in cardiac arrest. Therefore, taking the dosage as prescribed by your physician is essential.

The recreational dose of Tapentadol is considered to be over 600mg in a day, and that of Nucynta ER is 500mg. Thus, one must never take more than the prescribed Tapentadol dosage.